In a visit to Mongolia on Tuesday, Secretary-General Antonio Guterres underscored the UN’s full solidarity for the country, which he described as “a symbol of peace in a troubled world”.

Mr. Guterres was speaking to journalists at a press conference in the capital, Ulaanbaatar, following a meeting with the Foreign Minister, B.Battsetseg. He stated that in a world with dramatic geopolitical divides, and where conflicts proliferate everywhere, Mongolia – as an area free of nuclear weapons – is an example for other countries to follow.   “We live in a world where for the first time in decades people are thinking that a nuclear war might be possible again,” said Mr. Guterres. “There is only one way to be absolutely sure that a nuclear war is impossible, and that way is if there are no nuclear weapons.”

Mongolia is the latest stop on the Secretary-General’s visit to Asia, which began in Japan on Friday. Over the past six decades, the country has become an increasingly important contributor to the UN’s work, he said.

Mr. Guterres expressed gratitude to Mongolian peacekeepers serving at UN peace operations, “often in the most challenging settings and with courage in the way they protect civilians where unfortunately, there’s sometimes no peace to keep”.  The Secretary-General had met with Mongolia’s President, U.Khurelsukh and other senior officials, earlier on Tuesday.

They discussed the geopolitical situation in the region, the challenges Mongolia faces as a landlocked country, and national efforts to tackle climate change.

“My generation was very stupid. My generation declared war on nature – with climate change with the loss of biodiversity, with pollution,” he said. Mr. Guterres stressed how “nature is striking back” with storms, desertification, floods and disasters, which are making life very difficult for many people around the world and causing many victims.   “Your generation has an important task to make peace with nature,” he said.  “And what we are going to do today, must be a gesture of that new attitude to make peace with nature.”

The Secretary-General also visited a nomadic family in Mongolia and learned about their way of life. He also met a group of beneficiaries from UN projects, including women entrepreneurs and youth activists. 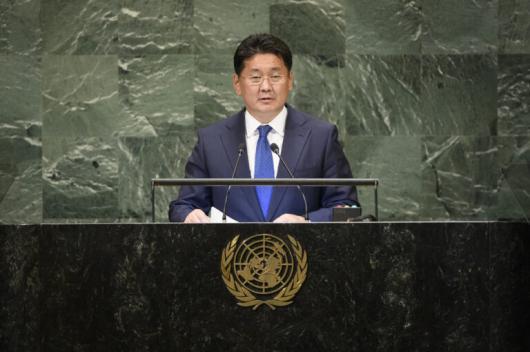