A western Mongolian province of Uvs was affected by two earthquakes on 8 March. According to National Emergence Management Agency, 4.5 magnitude earthquake rattled in Uureg Lake at 09:45 a.m. Soon after another 4.5 magnitude tremor has been recorded approximately 183 km northwest of provincial center of Ulaangom city.

The NEMA also said they had received no reports of damages or injuries and felt “nothing significant.”

Mongolia recorded over 40 thousand earthquakes in 2021.

Compared to 31 earthquakes in 2010, the number of occurrences increased by over 10 times in the last decade. 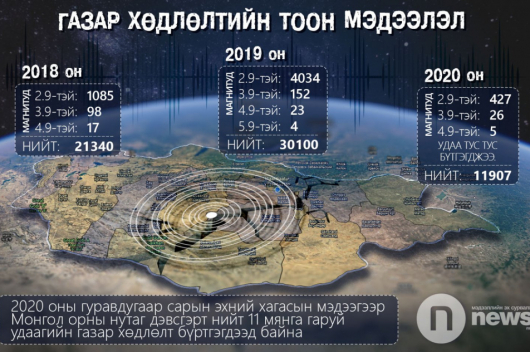 255 quakes reported in Mongolia this year