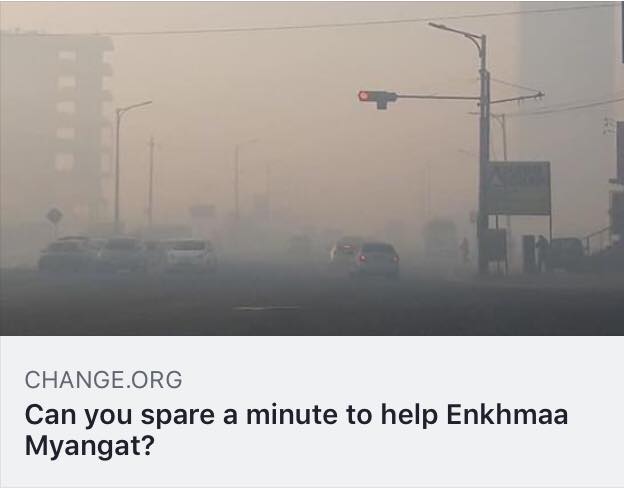 Mongolians are signing an online petition for the attention of the United Nations regarding the chronic air pollution in Ulaanbaatar – one of most polluted cities in the world. Over 36,500 signatures were collected for the online petition within just 36 hours.

The appeal of “Death from Smog in Mongolia # Human Rights” was initiated last week by an Ulaanbaatar resident who called himself Bat-Enkh. It was put forward on the petition website change.org.

Any website petition has to collect at least 50,000 signatures before it can go forward for consideration.

In Ulaanbaatar, more than 800,000 residents burn poor-quality raw coal and other flammable materials to keep warm and cook meals during the six-month-long winter season, contributing to 80 percent of the local air pollution.

Since the early 2000s, the Mongolian government, international donors and development organizations, including the World Bank and the Asian Development Bank, have spent millions of U.S. dollars combating the air pollution in Ulaanbaatar.

However, the city has yet to see significant improvements. Its air pollution on the 30 January earlier this year was more than 130 times the safety level set by the World Health Organization.